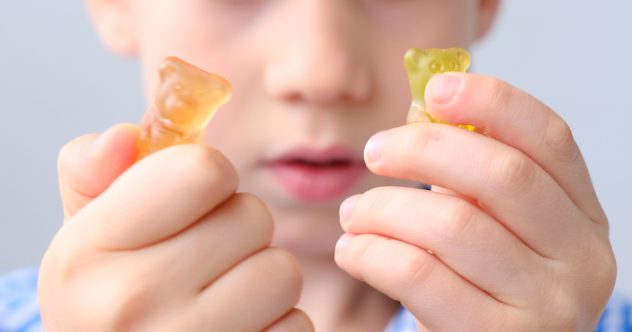 It’s just a fact of life that, eventually, every food product the world is absolutely crazy about will be discontinued. Some fans still hold a grudge against the food manufacturer even decades later. The rest of us shake our heads and wonder what kind of insanity overtook our otherwise refined palates. We ask ourselves how we were duped into thinking these foodie fads were not only delicious but nutritious as well. Here are ten discontinued food items that seem questionable at best.

Weiner Wrap was conceived as a way to oven-bake the hot dog and bun together in one step. The can of six flat sheets of dough made by Pillsbury easily wrapped neatly around the individual hot dog. You placed them on a cookie sheet, and twenty minutes later, out came a plump, hot juicy hot dog in a flavorful warm bun. Weiner Wrap came in three flavors, plain, cheese, and onion.

These were an instant favorite in kitchens all across the country because it was an item teenagers could prepare all by themselves. An entire generation of people in their fifties remembers when Mom and Dad quit cooking for two years and let the kids eat Weiner Wraps every night after they joined the bowling league or went out drinking with their friends.

If one of your peers in the cafeteria had a cold Weiner Wrap in their lunch box, you’d be sure they were either very lucky or completely neglected. Like so many heavily processed items of the seventies, Weiner Wrap went the way of the dog as the aerobics movement fueled a trend towards healthier eating.

Frito Lay marketed and produced WOW Potato Chips and WOW Doritos from 1998 to 2002. These junk food items contained the newly developed Olestra, a fat substitute that contains no calories, thereby lowering or eliminating the fat content of a food item completely.

One can imagine these gross side effects did nothing to bolster the reputation of this new product. “Thank you, Jane, your party was marvelous! Bob and I woke up with a mean case of diarrhea, and we had to throw out our underwear. Otherwise, your snacks were the bomb!”

Pizza Spins were a General Mills junk food item invented in 1968 and discontinued in 1975. Consumer surveys of the sixties showed pizza to be the number one flavor profile all Americans craved, and so the race was on to perfect the ultimate crunchy pizza-flavored snack food.

General Mills printed this phrase on the back of each box of Pizza Spins: “All the true delicious pizza flavor in a munchy, crunchy, mouth-sized snack.” What they didn’t include but probably should have, was a precaution stating that Pizza Spins had all the flavor of an acid indigestion burp fueled by sawdust and your great aunt Matilda’s seven-day-old spaghetti sauce.

Not even the healthy digestive tract of a ten-year-old boy could escape the painful burning sensation in the gut after consuming a handful or two of these little imitation pizza wheels.

Freshen Up Gum, marketed as “The Gum That Goes Squirt” was first offered for sale to the public in 1975 and discontinued in 2019. It was available in cinnamon, spearmint, peppermint, and bubblegum flavors. The inexplicable selling point of this chewing gum product was that when you bit into the gum, it burst forth with a creamy gel that allegedly “squirted your breath with refreshment.”

If your first experience with Freshen Up Gum was being offered a piece that had been carried around in someone’s pocket or sitting on the center console of a hot car, you were treated to the most unpleasant surprise of a hot, unusually flavored semi-liquid goo exploding in your mouth. Your brain then had to decide whether to gag, choke, swallow, or assimilate the hot goo into the chewing gum for a most unpleasant twenty seconds or so.

Jell-O 123 was a dessert of convenience that touted itself as a “dessert with two toppings.” In television commercials, Jell-O 123 was portrayed as being a source of fascination to watch as it developed in the individual serving dishes it was poured into after being prepared.

The fruit-flavored powder was mixed in a blender with hot water. What initially appeared as a cloudy liquid mix soon separated and settled into three distinct layers. The first layer was gelatinous, while the second layer was loosely similar to a creamy custard and the third layer was somewhere between a mix of damp sponge and foam.

One box made four meager portions, each barely filling a custard cup. It’s quite possible that ingesting a larger amount of this strange chemical mix orchestrated in a laboratory would cause imminent regurgitation. Jello- 123’s colorful hues bore a striking resemblance to the contents of a child’s stomach after a day at the fair eating too much cotton candy.

Oscar Meyer Sandwich Spread was a product sold in a plastic tube in the hot dog section of the grocery store. It was made of chicken, pork, and beef by-products ground up into a paste with added seasonings and pickle relish.

If you weren’t a fan of sliced baloney sandwiches with all the fixins’, or it was just too much work to put one altogether, then Oscar Meyer Sandwich Spread was a culinary dream come true.

Step one, slice open the plastic tube. Step two, slather the baloney paste on bread. Voila! In under 30 seconds, you had a powerfully aromatic sandwich that was practically already chewed for you. Apparently, cooking a hot dog or separating pieces of baloney was too tough a task for a lot of folks. Unfortunately for Oscar Meyer Sandwich Spread devotees, this product was discontinued a few years ago.

Heinz’ Easy Squirt Ketchup, introduced in 2000, was a line of brightly colored ketchup designed and marketed for children. The first color ‘Blastin’ Green’ rolled out as a promotional gimmick timed for the release of the movie “Shrek.” By the end of the slow and steady rollout of Funky Purple, Passion Pink, Awesome Orange, Stellar Blue, and Totally Teal colored ketchup, over 25 million bottles had been purchased.

Easy Squirt Ketchup’s fall from grace occurred when it was discovered the process by which red tomato ketchup magically turned a bright, unnatural hue. The red tomato color had to be stripped, and the chemical colors introduced to the mix. This process altered the flavor requiring the addition of other tangy ingredients.

Legally the product could no longer be called traditional tomato ketchup. Moms and Dads everywhere were already queasy from watching their children squirt this brightly colored product on everything they could eat. The fact of it no longer being legitimately able to call itself tomato ketchup was the final straw, even for those who patently refused to acknowledge that nutritional content matters.

Space Food Sticks were introduced to the public by Pillsbury in 1970 at the height of interest in NASA. People were fascinated by the science of astronaut survival in space, and there were no shortage of toys, clothing, books, and space flight marketing gimmicks patented and produced for public consumption aimed mostly at children.

Space Food Sticks were an item everyone could get on board with and they were marketed with the entire family in mind. Since there was nothing more concrete than mere speculation at what an astronaut’s food should look, feel and taste like, the public was perfectly positioned targets for this enterprising marketing campaign. The television commercials sounded and looked official as if the director of NASA himself were instructing all of us to become consumers of astronaut food.

After all, look how healthy and brave these men were.

For several years, children and adults alike convinced themselves that the chocolate, caramel, and peanut butter flavored foil-wrapped rods were actually palatable. The public was successfully convinced Space Food Sticks were an energizing, superior way to recharge their batteries even though they looked like something the dog left behind in the backyard.

Eventually, the collective delusion lifted, and Space Food Sticks blasted off to the great failed food product graveyard in the sky in the early 1980s.

Figurines were a crunchy wafer-like bar, the marketing of which preyed upon women’s diet insecurities. Introduced in 1974, Figurines were available in a variety of flavors and were full of fat and sugar. The psychological rub was that “Figurines are full of added vitamins.”

Although not explicitly stated, these 300 calories per pouch bars were meant to be used as a meal replacement. Along with the heavy consumption of cigarettes, Tab diet soda, and caffeine pills — a popular mix in the 1970s — teenage girls followed in their mother’s shoes by starving themselves of real food while consuming products like Figurines in order to achieve an impossible standard of beauty.

Ultimately the Figurines diet bar craze ended up as just another diet food fad in the arsenal of weight loss tools the average American woman kept in steady supply. As the consumers of Figurines aged out, so did the wafer’s popularity, and they were discontinued in the early 80s.

How can you tell the taste difference between a gummy bear and a sugar-free gummy bear? You can’t. Until somewhere between minutes to hours after consuming a handful or two of the Haribo sugar-free gummy bears, you are overcome by the curse of Maltitol, a sugar alcohol used as a sugar substitute in many confections.

Maltitol acts as a seriously powerful laxative in almost everyone who is unfortunate enough to consume it unawares. Who would have thought the pleasurable act of indulging non-stop in a package of cute little gummy bears could lead to the agony of visiting the porcelain god indefinitely with explosive diarrhea?

In no time at all, Haribo wisely made the decision to remove these vindictive little bears from their candy lineup. Beware: other companies have not been quick to do the same.

Processed foods lead to weight gain, but it’s about more than calories

10 Not So Sweet Facts About The Sugar Industry

Top 10 Myths You Still Believe About Your Favorite Treats